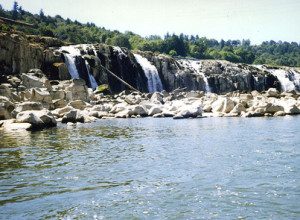 One of McLean House’s most exciting features is its proximity to the beautiful Willamette River, which runs through the heart of Portland and West Linn, Portland’s southern neighbor. Often our guests are new to Oregon; they will have traveled across state lines to enjoy a wedding on the historic McLean House grounds or to enjoy our gardens, and when they do– questions invariably arise about our beloved landmark, the Willamette River.

In fact, even many natives to Oregon have yet to be introduced to the rich history of this unique natural resource! So why not talk a little bit about our West Linn historic property’s nearest natural neighbor?

Where it came from

Like other natural landmarks, the Willamette River’s shape and drainage has changed with the movement of tectonic plates over the past 35 million years or so. However, its most recent renovations probably took place during the Missoula Floods, which occurred at the tail end of our last ice age and are responsible for shaping quite a bit of eastern Oregon and Washington as well.

The Willamette is a tributary of the Columbia River (the river along Oregon’s northern border with Washington.) It flows north, toward the Columbia, between two mountain ranges: the Oregon Coast Range, and the Cascade Range. The Willamette Valley lies between these two ranges, a fertile and beautiful area that it is home to over two thirds of Oregon’s population.

The beauty and fertility of the Willamette Valley has attracted people for years– in fact, for thousands of years. Long before explorers and settlers originating from Western Europe ever set foot near the Willamette River, indigenous people lived and thrived in this special area of the world.

Many different groups of people lived in the Willamette Valley before settlers, and their names are still in use today: Chinook, Clackamas, Yamhill, and even the name of the river itself originated from the valley’s first inhabitants.

Because of the biodiversity and richness of the land, indigenous people in the Willamette Valley practiced a variety of ways to make a living: some fished for salmon, others hunted, and still others farmed. Some groups were mobile, moving from place to place, and others set up shop with log houses and sturdy dwellings.

After settlers arrived, the river began to be used for other purposes. When newcomers were still arriving to Oregon via the Oregon Trail, the Willamette River served as an important transportation route. And later, after cities and towns were springing to life, the river continued to be a major resource for trading vessels.

Soon after this, dams began to be built on the river to create hydro-electricity as well as to begin to control the river’s flooding patterns for the benefit of the humans living in close proximity to it. In addition, fisheries and other businesses that utilized the river’s wildlife began to take off.

The McLean House and the Willamette

When the McLean’s built their home in 1927, they chose the banks of the Willamette River for its timeless beauty. Now guests of the McLean House get to enjoy two historic treasures when they visit our property: the McLean grounds, and the Willamette!

At the McLean House, your special event will stand out. Contact us today and to learn more!